Big Brands’ Dash for Amazon Cash Is No Joke 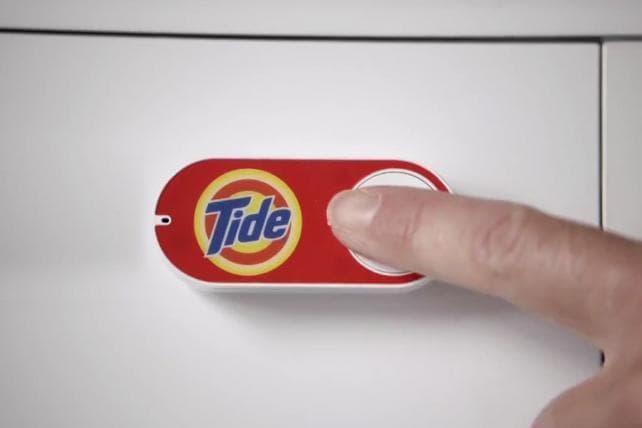 Amazon Dash, the push-button auto-replenishment service that the e-commerce giant has begun testing with select Amazon Prime members, could give big packaged-goods brands the edge they’ve been looking for on a playing field where the industry’s traditional behemoths have been getting pushed around by smaller players.

Amazon has been getting growing attention from packaged-goods brands in recent years, even if it only accounts for low-single-digit percentages of sales for most. But analysts say smaller and specialty brands often have much bigger shares at Amazon and other e-commerce players than in brick-and-mortar stores, thanks to the near-infinite shelf space online. Such brands as Method and Seventh Generation have long gotten more than a quarter of sales from e-commerce.

“Dash could be a way for the big brands to hold their footing in e-commerce,” said Jason Caine, e-commerce sector lead for Millward Brown.

Amazon hasn’t said exactly how the model would work, but Dash could easily become a conduit for trade-promotion funds as brands bid for buttons, which would be like miniature end-caps in millions of homes.

For now, Dash remains experimental. And it provoked so much skepticism that Amazon had to publicly affirm that it wasn’t an April Fool’s joke.

But the brands participating are serious.

The move comes as Amazon is clearly focused on CPG as an area of growth — and revenue. Last year, the retailer hired P&G veteran Sunny Jain to head its CPG business. And tapping into a growing CPG appetite for its data, Amazon recently began offering category sales numbers to companies paying $5 million to $10 million a year for advertising, according to IRI Worldwide. CPG’s vast multi-billion-dollar pool of trade-promotion funding has to be attractive to a fast-growing retailer under increasing investor pressure to turn a profit after showing a loss last year.

“One of the key barriers for many consumers to participate in subscription models is the need to predict your usage,” said a K-C spokesman. By participating in Dash, he said, “we are able to offer consumers greater control on when their next order of Cottonelle or Huggies will ship.”

Amazon Prime and its 40-million members are already having a substantial impact by creating a segment of heavy online buyers fiercely loyal to Amazon. Prime members’ conversion rates — or the percent of visitors to the site who end up buying — is just over 60%, Mr. Caine said. “When you look at those same people, they’re converting at a rate of only 6% when they visit Walmart.com.”

Prime is also making some surprisingly strong inroads into such high-frequency categories as beverages, Mr. Caine said, which also poses a growing threat to foot traffic at offline retailers.

From AdAge.com, 04-03-2015, copyright Crain Communications Inc. 2013. This article was written by jneff@adage.com (Jack Neff) from Ad Age and was legally licensed through the NewsCred publisher network.