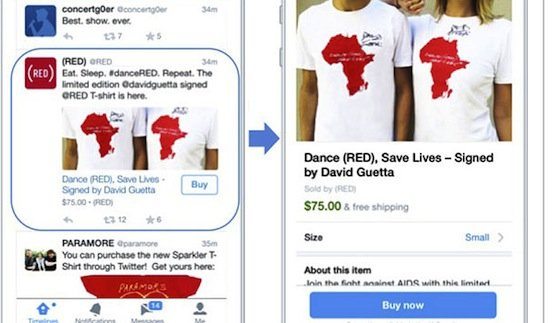 Twitter is now a shopping platform. On Monday, the social media company introduced its Buy Now button, a feature that allows users to make purchases directly on Twitter.com and through its mobile-app.

“You’re going to see native ad units become transactional,” said Nathan Hubbard, head of commerce at Twitter. “We’ve put a stake in the ground at the leading edge of this.”

Yet Twitter is moving cautiously with the product, which it says will only operate in the U.S. and be seen by a “small percentage” of users. Just twenty-six nonprofits and musical artists were handpicked to deploy the feature, including country star Brad Paisley, the rappers Eminem and Wiz Khalifa, and the death metal band Megadeth.

Only two brands have inaugural access: Burberry, the fashion retailer, and Home Depot.

“They’re examples of partners that have done really innovative things on the platform,” Mr. Hubbard said of the brands. “Artists,” he added, “have a broader history of having a direct relationship with consumers. They know how to do it.”

Participating artists can use the feature as they see fit, Mr. Hubbard said, including serving as paid influencers for advertisers. He said the company plans to add additional brands to the list by the fourth quarter. Agencies, too, will be courted. And the shopping feature will soon arrive in ‘Flight School,’ the online tutorial Twitter launched for ad agencies.

Twitter hired Mr. Hubbard, the former CEO of Ticketmaster, in August 2013 but has kept most of its commerce plans under wraps.

In July, it moved to acquire CardSpring, a digital payments infrastructure company, on the same day that Facebook introduced its click-to-purchase test product. Two months prior, Twitter began partnering with Amazon, allowing users to add to their e-commerce carts with a hashtag. On an earnings call in July, Dick Costolo, Twitter’s CEO, described the Amazon relationship as “just that: another test.” He noted that Twitter was working on a “number of explorations” with commerce.

Neither Amazon nor CardSpring, whose acquisition has since closed, is involved in the new Buy Now button, Mr. Hubbard said. Instead, Twitter partnered with Stripe, a payments startup, to handle processing and three e-commerce providers — Gumroad, Musictoday and Fancy — to handle the logistics.

On Friday, Bloomberg reported that Fancy, an online retailer, is in talks to find a seller after it failed to secure necessary funding.

Twitter said that all payment and shipping information is fully encrypted and will not be shared with the seller without consumer permission.

“We’re wading cautiously into these waters because we hold the covenant of trust we have for our users very dear,” said Mr. Hubbard. Today’s news comes a week after a major security breach with Apple’s iCloud. And it comes the day before the iPhone maker is expected to introduce its latest smartphone, with a robust mobile payments system.

Mr. Hubbard insisted that neither of Apple’s moves affected the date of Twitter’s announcement.

Twitter reported advertising revenues of $277 million last quarter, plus an additional $35 million from data licensing and other sources. Its new Buy Now button will not leave a mark on the company’s finances this year, Mr. Hubbard said.

But he imagines its presence on Twitter feeds will accelerate quickly. “The intention is to move to 100% of U.S. users as soon as possible,” he said.