Marketing Blog → The Price of Personalization Failures; Paywall Changes at The New York Times and Wired

The Price of Personalization Failures; Paywall Changes at The New York Times and Wired

New data on personalization shows that consumer expectations continue to increase, even as shoppers remain leery of sharing personal information. We’ll take a look at the implications of this new data and also at changes in how both The New York Times and Wired are limiting access to content for those who don’t subscribe.

Retailers Flub Personalization at a Cost of $756 Billion

Retailers need to find a balance between consumers’ desire for and fear of personalization. If they don’t, says Accenture’s 13th annual Global Consumer Pulse Research survey, they’re leaving a total of $756 billion on the table.

This year’s survey emphasizes that consumers are both drawn to personalized marketing and concerned about personal data privacy. When retailers don’t deliver on personalization, 44 percent of consumers switch companies, reports Accenture. At the same time, 49 percent of consumers surveyed by Accenture are concerned about privacy as it relates to personal data. Of the 2,000 U.S. consumers surveyed, 43 percent said they would shop with companies that deliver secure, personalized marketing. 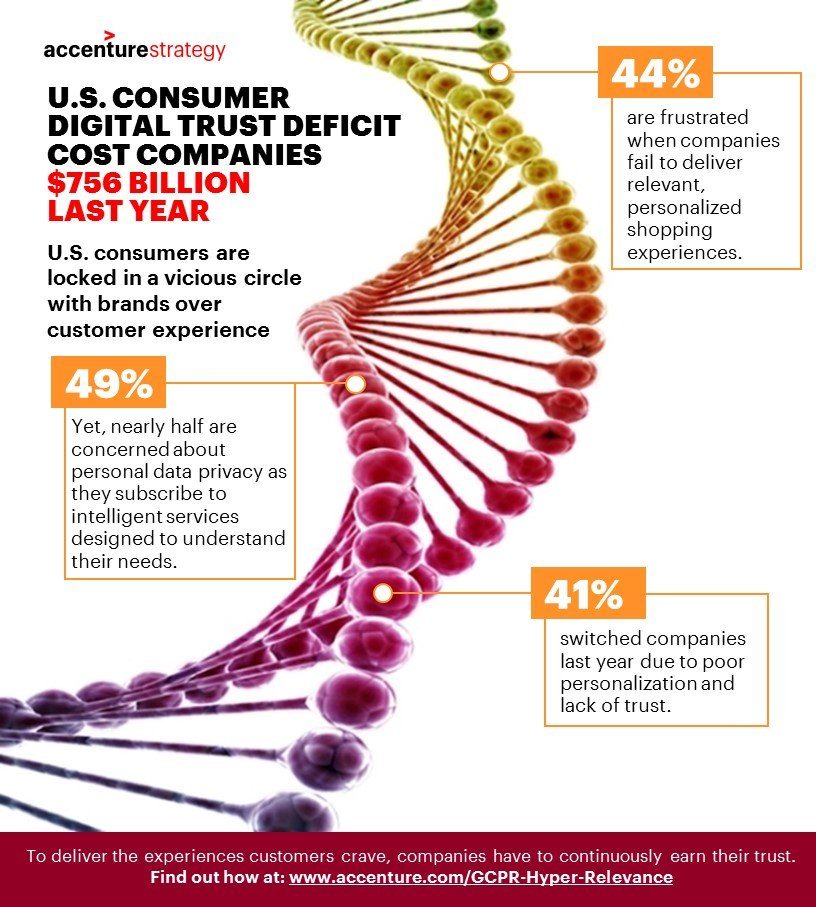 That leaves just one tactic for retailers: Build trust. Some 66 percent of consumers said that companies could earn their trust by being open and transparent about their use of personal data. The report also suggests that retailers offer consumers access and control over their personal data, and make efforts to educate consumers about the safety of that information. Another strategy: Invest in predictive analytics as a tool for gaining insight into customer needs.

For the first time since 2012, The New York Times has decreased its free-article limit. Instead of allowing non-subscribers 10 free articles a month, the Times is now offering only five. The change is part of the paper’s continuing focus on building subscriber numbers on the back of the current “era of non-stop, must-read headlines,” reports Bloomberg.

An increased demand for news has already boosted subscriber growth at the paper. The paper currently has 3.5 million subscribers, more than double the number two years ago.

“We think it’s as good conditions as any to demonstrate to people that high-quality journalism is something to be paid for,” said Meredith Kopit Levien, the New York Times Co.’s executive vice president and chief operating officer.

While lowering the number of free articles could create a drop in site traffic and a subsequent drop in ad revenue, Kopek Levien said it’s worth the risk, because most pageviews on the site come from paid digital subscribers.

The way in which a reader arrives at the digital version of the paper also impacts how many free articles a reader can see. Since June, the paper has placed limits on access to articles that are accessed via social media. Readers that come to an article through the front page of the paper are more valuable. Eventually, the paper may opt to personalize access to free articles depending on how readers arrive and how much of the paper they read.

Wired is moving ahead with plans to pivot to a digital future. The first step: putting an online paywall in place this coming January.

The move to focus on subscriber revenue is part of the magazine’s editorial “reboot” to protect its future, editor-in-chief Nick Thompson told the Wall Street Journal. Another element of that reboot is an increased focus on technology versus general interest stories, to provide a more “narrow, deep look at technology” that readers will be willing to pay for.

While the number of free articles has yet to be set, Wired’s owner Conde Nast says that this move may be followed by more paywalls for other publications. Thompson was at the New Yorker when its paywall went up in November 2014, and many are looking to the success of this venture to see how it could be replicated across other Conde Nast publications.