This article originally appeared on The Next Web

Social discovery and sharing platform Shareaholic today released its first report examining engaged social referrals. Since many of us spend an egregious amount of time using social media, the company was interested in answering the question “What is our behavior post-click, when we actually interact with a link one of our friends shared socially?”

As such, it was necessary to examine the average visit duration, pages per visit, and bounce rate for each of the top eight social media platforms. Here’s the breakdown (data is from September 2013 to February 2014) from Shareholic, which tracks 250 million users visiting its network of 200,000 publishers: 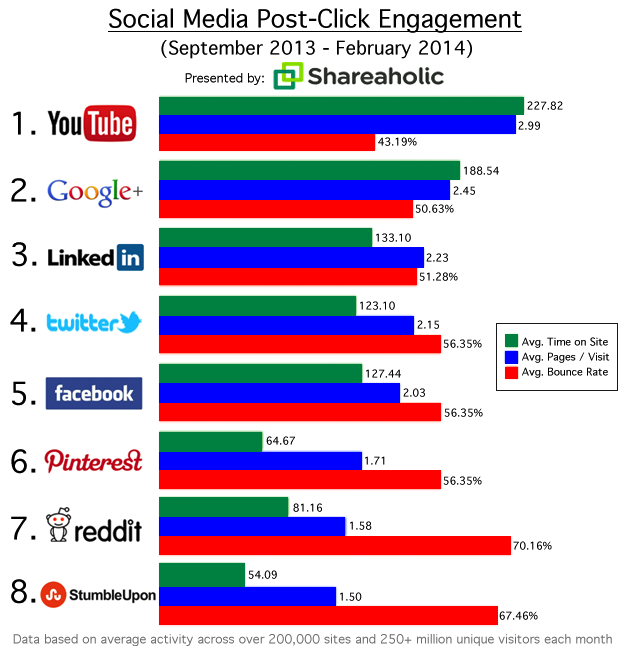 We already know that LinkedIn and Google+ drive very few referrals compared to their competitors. Yet it turns out the traffic they do drive, is actually quite high on the quality scale.

Other findings from the report include:

We specifically excluded these three in our analysis as they didn’t seem comparable to the other sites. YouTube is all about video, which by definition is more engaging than a mix of videos, photos, and text.

Reddit and StumbleUpon meanwhile are link aggregators. While they both drive massive amounts of traffic, users aren’t getting recommendations from their friends or followers, so it should surprise nobody that they’re less engaged with the resulting content.